Located at the south-western end of the castle, its only tower, the so-called Fire Lookout Tower stands 48 metres tall. The cylindrical part of the tower, made of broken stone, possibly dates back to the Middle Ages, but the exact time of its construction is unknown. The tower’s foundations are level with the square in front of Castle Hill but the entrance opens from the castle area, several metres above the fundament. The earliest documents in which the ground plan of the tower appears are the survey drawings of imperial military engineer Giulio Turco from around 1570. 17th century engravings of the castle show a stout tower in the place of the Fire Lookout Tower. Around 1660 the sizeable south-western corner bastion of the castle was constructed next to the Fire Lookout Tower. The earliest panorama depiction in which the now existing cylindrical lower part of the tower is clearly identifiable is an engraving by Friedrich Bernhardt Werner made around 1730. 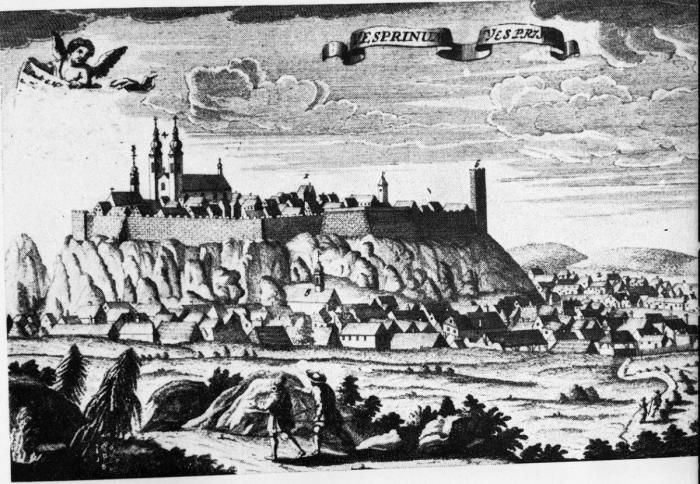 The tower was damaged in the 1810 earthquake, the epicentre of which was under the town of Mór 38 kilometres away. At that time Veszprém city council asked for a permission from the bishop to have it demolished and its construction material be used for the planned building of the Fire Engine House (City Hall from 1818 to 1885, Guild Hall after 1885). Veszprém’s nobility, however, would only consent to their donation of one third of the costs to the construction of the Fire Engine House if the town did not pull the tower down. The tower thus remained and was renovated; moreover, architect Henrik Tumler designed an upper extension in the late Baroque style and a circular balcony, which were built between 1811 and 1814 “for a night and day fire lookout”.

The document inside the ball ornament on top of the tower, written by certified town clerk János Csirke on 27th October 1814, reads as follows:

“This Tower, having stood for several Centuries and commonly called Watch=Tower, from the point where it is no longer round but takes on a rectangular shape, has now been erected to this splendid and magnificent state as a grace to Common Safety and the City, two-thirds part at the expense of the City Commoners and one-third part of Nobles’, and in addition Several City Dwellers’ voluntary donations, in this current Year of One thousand Eight hundred and four teen.” The names of artisans involved in construction works are also known: “Master Mason Sebestyén Szapkovics, with Foreman János Vizler; Master Joiner Jóseff Fogt, with Foreman Károly Tillinger; Master Locksmith Bernát Jordán, Who gave a Master piece of his Artisan’s Skilled practice in the preparation of the Coat of Arms of Hungary and the Crown. Painter Károly Foichtinger, who guilded and decorated those; Master Tinker Ignácz Krénicz, who will cover the entire Tower roof; likewise Master Ball Gilder János Teller, who Magnificently gilded that Ball to fiery reflective pomp with molten pure Gold of 25. pieces of a value of Four forént Thirty Krajczárs each ‒ all of them Citizens and Dwellers of the City of Weszprém”. 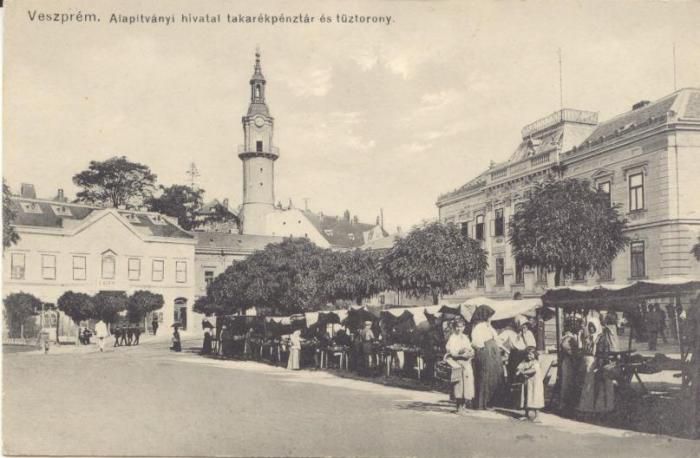 From this time on, the tower was mentioned as Fire Watchtower or Watchtower, with a permanently employed fire watchman stationed in it. Under the tower, the building of City Hall constructed by master mason Sebestyén Strapkovics was also called Fire Engine Hall, which refers to the fact that a (horse-pulled) fire engine was standing ready at all times under the arches of both (now walled up) front gates. The completion of Tumler’s extension is recorded on the plaque placed high on the tower wall: “DEUS EST FORTITUDO. RENOVATA 1817” (God is strength. Renovated 1817.) The current state of the tower is shown on the lasured pen sketch by János Berken of Nemesvámos (1817-1818): “The Watchtower by the new City Hall”.

The next repair of the tower took place in 1891. Details of this were recorded in City Notary Lajos Vikár’s “Memorandum” dated 22nd October 1891 and placed in the tower’s ball ornament. Work was done by master joiner Antal Kéz, apprentice joiner Ferenc Kéz, masons Mihály Tóth, Ignác Paksi and János Takács, master coppersmith Mihály Szilágyi, master gilder Lajos Mező, watchmaker István Mendelényi, technician Antal Kohl (cleaning the tower ball), and Antal Eotli, ironworks owner of Budapest (manufacturing the iron winding stairs). On this occasion solicitor and fire chief dr. Ferenc Óvári connected the Fire Watchtower to City Hall and his own flat “with a telephone line for the speedier notification of fire”. At this time the firemen on watch in the tower, paid by the city, were Károly Szép, Antal Kungli, Antal Beiczer and Sándor Kis. During World War II an air defence station functioned in the tower. 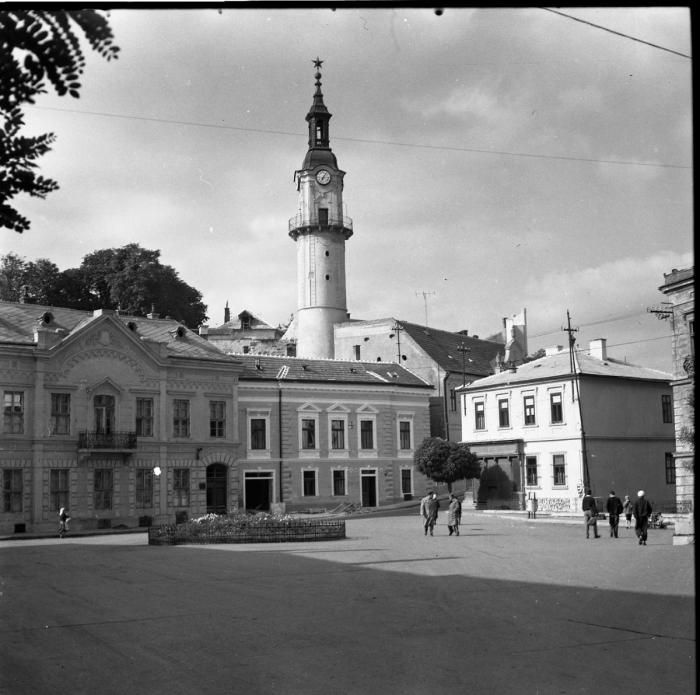 As the tower is visible from great distances, it has always been a suitable place for political and military powers in charge of the town to put their emblems on top of it. We know from the diary of assistant barber Károly Francsics that the black-and-yellow flag was hoisted here on 18th January 1849, when imperial troops took the city. Later, on 27th August 1849 the black-and-yellow banner again appeared there next to the national colours. The routine continued well into the 20th century. In the times of the 1956 Revolution master joiner László Nagy, assisted by Ferenc Szakács and Lajos Hungler, took the red star off the spire – the very same one he himself had mounted there in place of the coat of arms of the country. “We mounted it for a pay, but will take it off for free,” – he said. After the revolution the star returned, and was in place until the renovation of 1984. At that time, there was increasing demand to exchange it for the old arms, but the city’s leaders would not allow that. A new red star was mounted on the spire, and could only be replaced by the renovated old coat of arms in 1990.

The last major renewal of the tower took place in 1984. At this time, an archaeological excavation complemented the restoration, with the aim of finding out how deep the tower’s foundations are. As the tower is tightly surrounded by the adjacent buildings, there was no place for digging. For this reason, work to find the bottom of the fundament began inside the tower. Starting from the entrance threshold, specialists took a landfill out of the tower which was 7 metres thick, full of findings from the 17th to the 20th century. After this, they reached a level of stones embedded in mortar, but the structural engineer did not recommend further work. Thus, the attempt to measure the depth of the foundations was eventually unsuccessful.

Today, a Verbunkos (a genre which developed out of military recruitment songs and music) by local composer Antal Csermák is played every hour on top of the hour from Veszprém Fire Watchtower. A magnificent view of Veszprém’s districts opens up from the circular balcony.

The Fire Lookout Tower may be visited at your own risk!

This site uses cookies. By browsing the site, you agree to the use of cookies.
More information
I accept